A Springboard for Trump

by Timofei Sergeitsev
Donald Trump is a figure who has written up a true conservative program and flies it on his own personal banner, but the political system is at a loss for a response, observes member of the Zinoviev Club Timofei Sergeitsev. 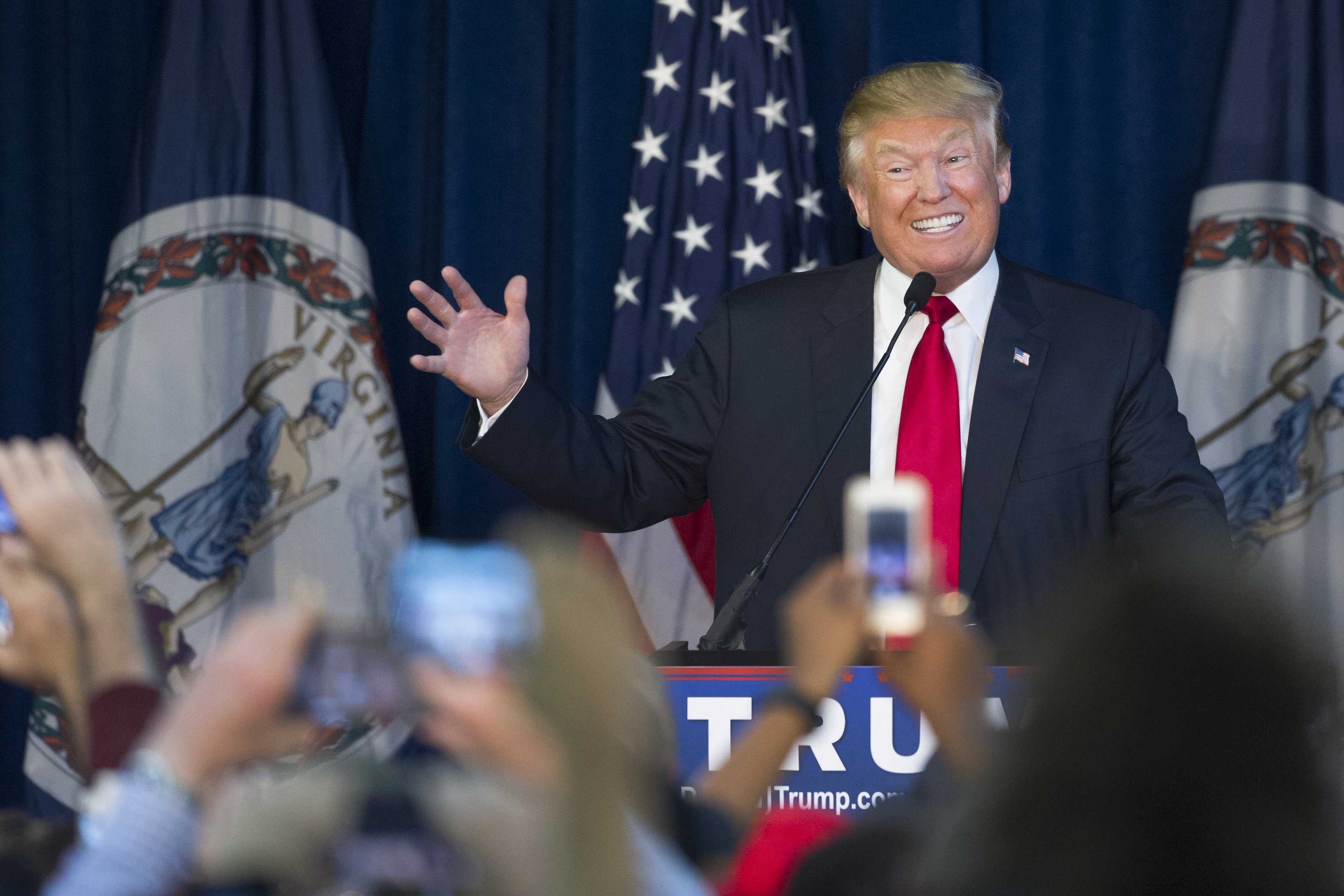 I can't help but like this red-headed guy. Sure, he's no friend of ours. In my defense, let me say that you don't often see an eccentric like this, an outsider who decides to cut out all that usual climbing the rungs of the political career ladder and goes straight to the top, to the very summit of power in the U.S., well, and many would say in the whole world, the entire American population looks at it that way, anyway. And this outsider, long before Super Tuesday, was already demonstrating a kind of ego and self-confidence the likes of which no one has ever seen.

He lost no chance to show off, glorify himself as the most famous upstart yet, and boast about how he got rich.

Oh yes, he'd already published books about how to make a billion, using himself as the example. You know, don't be stingy with your tips, tip at every possible occasion, and people will love you for it, they'll flock to you. And that's just what you need, so as to then fleece them for a million times more than you're giving them now. Advice of that kind, in short.

Now when this slightly plump fellow in the prime of life was busy doing business only, everyone had the impression he was a self-made man in the classic American tradition, represented only himself, only his own interests and goals, and he might pass this or that over in silence, distort the reality a bit, but you could guarantee that those were the goals and interests he'd follow, and they were clear and transparent overall.

People who represent themselves above all are an indispensable part of representative democracy, if it is still actually representative and hasn't transformed into a system for simply manipulating the masses from the shadows.

Someone who does not represent himself cannot represent anyone else. Representation works only when the person doing the representing defends his own selfish private interests, and in so doing also defends similar interests of those he represents. This is an imperfect system, but it does work.

The more people deceive those they represent, feeding them all kinds of empty talk in the hope of getting more votes, the worse the system works in the end. Eventually, it deteriorates into an edifice where you have a professional preacher at the top, rather than a president, who might be a black person or a woman (who would have thought it), depending on the fashion of the moment.

Such a figure promotes not himself, but abstract ‘values', and says what the countless public opinion surveys tell him people want to hear. In this way, he plays himself up as an ideal delegate beyond reproach (you all voted for his promises, after all) and freed from any kind of political responsibility. When reality proves his promises to have been worthless, the preacher puts the blame on natural circumstances, a spontaneous ‘crisis' (say, the free hand of the market at work), or on a good old foe (Russia, for example).

It is quite a symptomatic development that someone representing above all his own self has erupted onto the scene in the system of totally managed pseudo-democracy that had already fully established itself in the USA by the time Reagan came to power. This development deserves our attention and reflection no matter what path the system takes from here, and no matter what happens with Trump himself.

Trump's motives do not require much deep analysis. He makes no secret of the fact that he has grasped quite well that you can make billions at best in business, and what can you buy with that? If it's trillions you want, and if you want to buy countries as you would real estate, you need to go into politics. To do this, you have to get millions of people to love you, most of them, anyway.

What should they love you for? Well, for being a billionaire, of course. You embody their dreams, their hopes that they too could be just like you someday.

It's hard for Russians to conceive that you could love somebody like Trump, and love him for his riches, what's more. Home-grown Russian oligarchs, after primitively appropriating for themselves a share of state assets and finances, made attempts to flaunt their sudden wealth in the hope of winning public adoration, but these fiascos only showed their cultural, historical, and political ignorance.

Things are different in America, however. This kind of demonstration and adoration of wealth is part of an authentic basic cultural code and lies at the very foundation of the American social project. This kind of code is always based on basic considerations such as what people are willing to sacrifice for, and what are their dreams. The fact that a man who incarnates this basic American value, ideal and dream is seriously running for president now, and not just having a bit of fun and dabbling at something new, shows that a defensive reaction built into the American socio-political system itself has kicked in.

The system is looking to ‘reload', to use the trendy term from the computer world. In more classic analytical terms, the system has reached the regeneration point. Any system of collective human activity needs to undergo an organized and focused regeneration process, adapting to new historical circumstances, if it is to survive and continue. But rejecting the original basic code is not possible. Societies that do this face destruction. Such was the case with the old Roman Empire, and with other peoples and civilizations now faded from our world.

So long as the America of the neocons, living off debt, consumption, secularism, and pogroms around the world, the ripples of which have reached even old Europe now, was criticized only by the conservatives with no ‘neo' prefix to their names, it all looked as though only political obscurantists, marginal figures and near fossils on the brink of extinction such as Buchanan or Kissinger, could call for a return to the past.

But now we see the emergence of a figure who has written up a true conservative program, flies it on his own personal banner and is more than willing to keep on blazing forward. The political system just doesn't know what to do with someone like this, even though he has actually come as its rescuer.

But people don't like rescuers, not the incumbents in power, at any rate. In the USA, a president with real personality, speaking in his own name and leading his own party in his wake can expect a bullet to come his way, like Lincoln or Kennedy, or to die in dubious circumstances, like Roosevelt.

It makes no sense to try predicting now what will happen to Trump if he becomes the Republican Party candidate, then the president, and seriously gets to work.

One thing is sure though — he won't have an easy time.

People have been corrupted by unjustified living standards, and the elite have no intention of regenerating America. They use the country as a tool for globalization, the same way that Trotsky and his followers planned to use the USSR as a bellows for blowing fires of revolution high around the world.

Maybe Trump is only pretending to be the guy everyone has been waiting for and all his guts and fire will just turn out to be only PR. Maybe he won't get elected at all.

But it would be a mistake now to think that the USA lacks political forces that do not seek national regeneration — that is, recapitalize industry, bring back tough labor laws, limit immigration to protect the country's identity, limit consumption in favor of investment, and choose isolation rather trying to run the world. To take such a view now would be to underestimate the USA as a political nation.

If they do start following this program, with or without Trump, we can expect to see some waves for sure. After all, if the Americans really do decide to tackle their own problems, tackle them seriously and not just postpone them for later, as they do now, they will take the road they've always taken in history and will do their best to solve their own problems as much as possible at others' expense, primarily Russia's, and Europe's too.