by Dmitry Kulikov
At this intermediate stage the Russian Aerospace Forces have made Bashar al-Assad’s overthrow impossible and Russian diplomacy has precluded an invasion of Syria by Recep Tayyip Erdoğan. At least this is true in the short-term perspective, notes Zinoviev Club member Dmitry Kulikov. 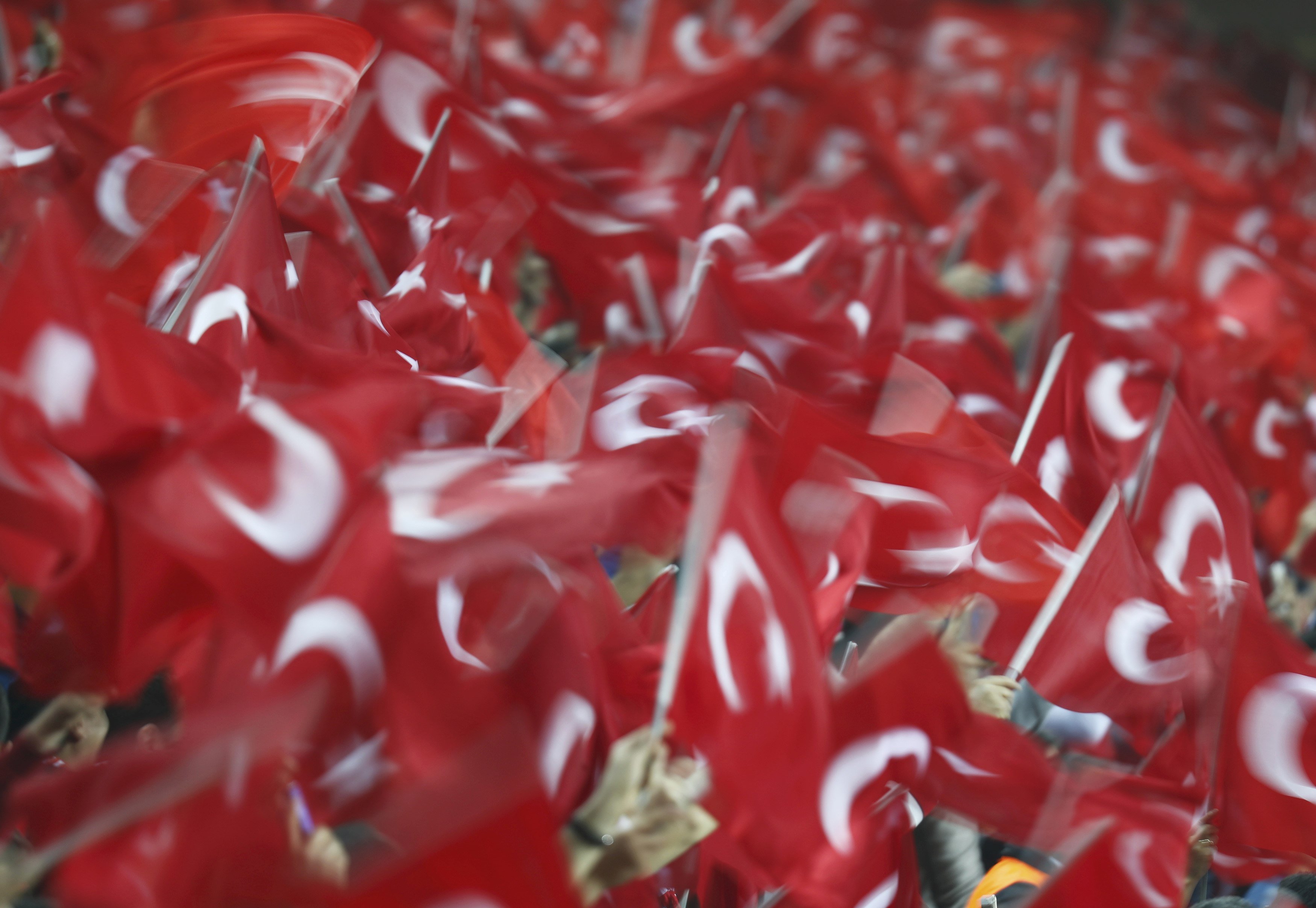 From Europeanism to a neo-Ottoman philosophy

Turkey’s example makes it clear that liberal assertions about the ideology-free nature of the modern government power are untrue, to put it mildly. Turkey’s priority in the past few decades of the 20th century was to join the European Union (EU) and be recognized an equitable European power where Turks would feel like real Europeans.

Over this period, there were many twists in Turkey’s attempts to make its European choice, up to and including the first decade of this century. But it is absolutely clear now that this Turkish idea is now bankrupt. The number of the advocates for accession into EU has decreased from 75% to 20% in 2015.

In parallel with the disappointment over the European project, the Turkish elite began developing a feeling for a neo-Ottoman Empire philosophy back in the 2000s, which is a very strong ideological substitute for Europeanism. Erdoğan and Davutoğlu have become the political advocates of this idea. They came to power on its coattails and maintain their hold on power to this day.

The idea of restoring the Ottoman Empire and Ottoman leadership in the Islamic world’s region, as well as Turkey’s participating in the division of neighbor states which are being destroyed, not only enhanced Erdoğan’s appeal during the elections but also gradually became a staple of his domestic, and, most important, foreign policy.

Incidentally, the “neo-Ottoman” choice of the Turkish political leaders did not evoke any enthusiasm in the United States and the West in general. Erdoğan encountered a number of color revolution attempts and was under fairly tough pressure. At that point he offered the West an exchange: Turkey, and he personally, would support the Arab Spring and Qaddafi’s overthrow in Libya and head the anti-Assad project in Syria, while the West would shut its eyes to Erdoğan’s domestic policy and neo-Ottoman ideology.

Huffington Post: Turkey will not avoid collapse in Syria

And the deal paid off.  All attempts at color revolution miraculously stopped and nobody denounced Erdoğan, either for the rout of the Turkish army upper crust, the imprisonment of generals or the arrests of human rights champions and opposition journalists. Freedom of speech and other “supreme values” of liberal democracy on Turkish territory suddenly stopped worrying the civilized West, which also closed its eyes to the de facto genocide of Kurds in Turkey’s eastern provinces.

Erdoğan had little left to do – overthrow al-Assad in Syria and take part in dividing the Syrian inheritance with other interested parties, such as Saudi Arabia and Qatar.

However, the Russian operation in Syria virtually put an end to the project of overthrowing al-Assad by radically weakening his main enemy – ISIS (prohibited in Russia) and other terrorist groups.

If the Syrian army, the people’s militia and the Kurdish military units manage to block the Turkish-Syrian border in the near future, ISIS will lose a source of supplies and retreat further eastward until it is compelled to return to its point of departure – Iraq, the Gulf countries and Turkey.

Having downed the Russian aircraft last fall, Erdoğan radically upped the ante in his big political game. He offered himself to the United States as both an anti-Assad and anti-Russian fighter. He opted for difficult bargaining with the United States and Germany in the hope of being compensated for the escalation of tensions and maybe even direct clashes with the Russians.

The refugee issue was used as a bargaining chip with Germany. In exchange Federal Chancellor Angela Merkel was supposed to pay ($3 billion a year) and back Turkey ideologically against Russia. She intensively demonstrated her potential readiness for this and actively blanched at the cruelty of Russian bombings to please Erdoğan.

The Turkish leaders believe that the United States should support Turkey’s anti-Russian escalation and allow Erdoğan to do what he wants in Syria’s north and destroy the Syrian Kurds. Turkish officials demanded this from the United States in public last week. I’d even say there were rather impudent in their demands.

It would appear that at that point Erdoğan must have considered himself indispensable for the United States and the West in general.

Syrian lessons for the world: Who has the right to invade?

Erdoğan hoped to launch a surface combat operation against the Syrian Kurds. He just had to guess whether the Americans would do this under public agreement or display tacit neutrality. He thought Washington would exchange Turkey’s anti-Russian position for the Kurds, which would let him escalate the tensions, wreck the domestic political process in Syria and try to eliminate al-Assad and Syria’s statehood directly. In his opinion, the United States ought to agree to this.

However, strategically it would be extremely bad for the United States to recognize the Syrian Kurds as terrorists. It is doing much to enlist sympathies from the Syrian Kurds for a long-term and many-year perspective in this highly unstable Middle East.

Syrian Kurds are a real force in any alignment during hostilities in the Middle East It is far more important for the United States strategically to have them as conditional friends rather than as real enemies. But Erdoğan hopes that tactically he may prove to be more important for the United States if he attempts to clash with Russian troops on the battlefield in Syria.

So, the United States is faced with a political choice. It does not like to make choices in principle, and still less so under pressure from Erdoğan. It will try to continue playing both the Turkish and Kurdish cards simultaneously.

However, I do not rule out that the United States will sacrifice Erdoğan and place its bets on the Kurds, that is, Turkey’s destabilization and its de facto transition to civil war. This is also possible because the disintegrating and boiling Turkey fits in well with the general US scenario of eradicating civilization in the Greater Middle East.

US Secretary of State John Kerry hinted already that if the political process in Syria fails, its partition may come next. If Syria is divided, Turkey may follow suit as well.

Erdogan supports a truce in Syria but with reservations

The Russian-US ceasefire agreement was not only Russia’s diplomatic victory but also a heavy blow primarily to Erdoğan. I think that these days he is beginning to realize that something went wrong. He has already backpedalled and his foreign minister has announced that Turkey is not going to invade Syria even though just a day ago the Turkish authorities asserted the reverse.

Indicatively, intensive consultations with Saudi Arabia and Qatar took place during preparations for the Russia-US agreement. But nobody invited Turkey to take part in the process. Having rushed to declare Russia its enemy and broken relations with it, Turkey now remains alone. Erdoğan most likely can count on Ukrainian President Petro Poroshenko for support. Erdoğan is coming to realize that he acted as the “dummy” in the old game of Polish preference. I don’t think he will enjoy this role.

The West has already used Turkey as an anti-Russian instrument.  This was implemented particularly rigorously during the Crimean war when France actively provoked the Russian-Turkish conflict, while Britain supported it up until and including the entry into the war against Russia when Turkey was on the brink of defeat and surrender after the Battle of Sinope. By the way, this was the only occasion when Britain was directly at war with Russia.  As usual Britain preferred fighting by proxy.

There was a similar case during the Russo-Turkish war of 1877-1978. Indicatively, Turkey lost both wars from the historic point of view.

And defeat is facing them now too — even without a war – merely due to Erdoğan’s blunders in political self-determination. The time to discuss the price of “the treacherous stab in the back” and all subsequent events is coming. Judging by Erdoğan’s statement that “Russia lost such a great friend in Turkey just because of two pilots,” the realization of what he did will be agonizing for him.

At this intermediate stage the Russian Aerospace Forces have made Bashar al-Assad’s overthrow impossible and Russian diplomacy has precluded an invasion of Syria by Recep Tayyip Erdoğan. At least this is true in the short-term perspective. The signed agreement became a subject of criticism and aggressive irritation on the part of Turkey. One of its ministers even declared that “regrettably, the United States and Russia made a tacit agreement on a number of issues linked with the region.” Turkey also believes that the ceasefire should not be applied to the Syrian Kurds.

In this extremely difficult situation we must consistently continue playing our military-diplomatic role in the Middle East. Today, we are doing this with great success.

The ceasefire agreement removed Erdoğan from the game, at least for the time being. I hope that during this time we will organize the Syrian domestic political process. One that will include, among others, the Syrian Kurds and stabilize the Syria’s statehood.

Meanwhile, Turkey, as it has often happened in history, will have to pay for Erdoğan’s neo-Ottoman policy with the highest risk of becoming another zone in the spread of instability that is very much in line with US plans.