An Alternative View of Nazi Butchers 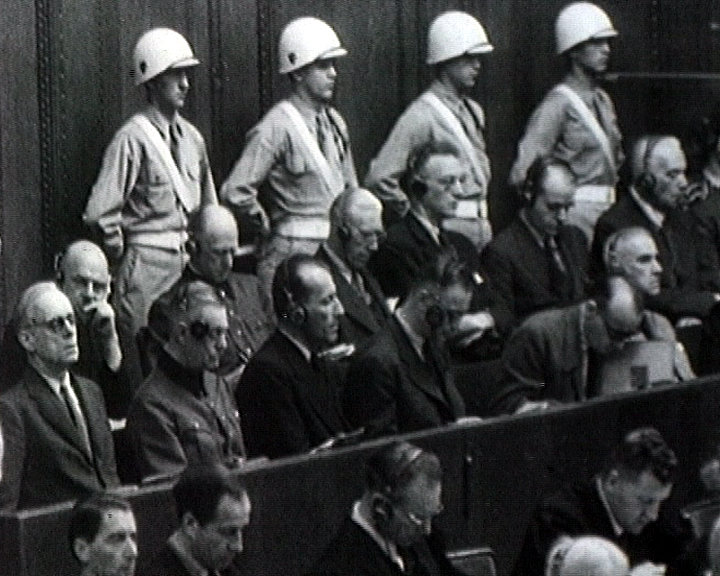 Seventy years ago, in early February 1946, several high-ranking Nazi criminals were sentenced to death at an open trial in Riga, the capital of Latvia. At that time, nobody in the Soviet Union or the West questioned the fairness of the sentences. But the falsifiers of history in modern Latvia, a member of the European Union, have announced that those Nazi henchmen were none other than "victims of Stalinism."

The 1946 trial in Riga was held concurrently with the Nuremberg Trials and was one of a series of such trials held in several European countries after the war. The seven Nazi criminals who were on trial in Riga left a bloody trail in the so-called Reichskommissariat Ostland (RKO), an occupied territory that included the Baltic countries (Estonia, Latvia and Lithuania) and western Byelorussia.

Military Prosecutor Nikolai Zavyalov and witnesses told a terrible story of crimes committed by the seven defendants and their subordinates in the Baltics and Byelorussia. The tribunal sentenced all of them to death by hanging.

The Nazi criminals were publicly executed at 3:30 p.m. on February 3, 1946, on Victory Square in Riga before numerous onlookers. Everyone thought at the time that justice had been served and that that chapter in the WWII history was closed.

Unfortunately, this was not to be. There exists another recording of events, a history which has been recorded by Baltic historians and promoted by Baltic politicians and journalists over the past 25 years and in which Soviet soldiers and resistance fighters are painted black, while local Nazi henchmen are presented as "freedom fighters."

Historian Ilya Nikiforov said: "The term ‘freedom fighter' has gradually acquired a very broad meaning and now includes not only the Forest Brothers but also those who volunteered or were mobilized into the German army, police battalions, or SS troops. In Estonia, those who served in the Finnish army and navy are also described as ‘freedom fighters'."

But the worst came when lawyer Andris Grutups published a book titled Ešafots (Scaffold), in which he compared Soviet military counter-intelligence Smersh to the Gestapo, the secret police of Nazi Germany, and Soviet writer Ilya Ehrenburg to Nazi Minister of Propaganda Joseph Goebbels.

Furthermore, Grutups expresses sympathy for the Nazi criminals who were tried in Riga and whom he describes as the victims of Stalin's judicial system.

"This book is strongly anti-Russian. Its author does his best to prove that Russians were just as criminal if not more so than the Nazis. One of his goals is to show that it was not a trial of German generals guilty of genocide but rather a trial of Germans by Jews and an act of Jewish revenge… His interpretation of the trial includes the comparison of educated and nice-looking defendants and ill-educated and coarse judges and prosecutors. He infers that the intelligent and proud German officers were sentenced to death by the obtuse and ignorant Jews and Russians… Ešafots is not at all a book of history, as it doesn't analyze or present historical facts," said Grigory Smirin, a historian from Riga.

Grutups' stance is as cynical and dishonest as the German criminals' attempts to justify their actions. For example, Baron von Monteton asked the high court in his final statement, to general laughter in the audience, "to take into account the fact that [he] is essentially a highly humane officer. But being an honest soldier, [he] kept his oath and hence was bound in [his] actions by the seniors' orders."

This "honest soldier" preferred not to speak about the orders he executed.

In the footsteps of Vaira Vike-Freiberga

The main criminal on trial in Riga was Friedrich Jeckeln. Grutups writes about him: "Jeckeln admitted his guilt, and did this openly and courageously. Opinions on this man can differ, but you can't deny him courage. Such behavior always commands respect."

So, a lawyer from an EU country believes that opinions on one of the main Nazi criminals can differ. But can they?

I'd like to remind the reader that Friedrich Jeckeln, the SS and Police Chief of Ostland, signed orders to execute hundreds of thousands of Soviet citizens. Jeckeln widely used a method of execution of his own invention, called "sardine packing" (Sardinenpackung). The killers forced the victims to lie face down in the trench floor on the bodies of the people who had just been shot and fired the condemned in the back of the head. It was under Jeckeln's orders that Germans and their Latvian henchmen killed thousands of Riga Jews in the Rumbula Forest on November 29 and on December 8, 1941. Do Grutups and his ideological peers really believe that opinions on these hideous crimes can differ?

Jeckeln also ordered the mandatory sterilization of gentile women married to Jews. Do you expect any differences in opinion on that?
Below we offer the testimony of the few survivors of the Salaspils concentration camp near Riga.

Says teacher Jazeps Kausinieks: "Worn out by hard work, we were forced to lie down and stand up, to wallow in the dirt, to jump like hares, or to goosestep. And the Nazis stood before the commandant's office and enjoyed our suffering. They also widely used trained dogs to torture the Salaspils inmates. These dogs were trained to jump on people, biting their legs, backs and all other parts of their emaciated bodies, which were barely covered with rags. The Nazis always considered these scenes, when the dogs bit and tore at their victims, as the highlight performance."

And here is what a Riga resident, Noah Geimanson, said: "As we were carrying away dead bodies on December 9, 1941, I saw 18 newborns killed in the ghetto maternity ward. The babies were killed by a group of Latvians led by Arvids ZAKITIS, who had announced that they had no bullets to spare on the poor babies, at which point they began throwing them on the floor and kicking them to death."

Grutups is not the first to write about these differences in opinions. The then President of Latvia, Vaira Vike-Freiberga, actually blazed the trail for these cynics and falsifiers of history several years ago, when she described Salaspils as an "educational labor camp." She didn't mention the fact that children in that camp were forced to donate blood for wounded German soldiers — thousands of liters of blood! Even year-old babies were not spared, with 100-150 grams collected from each of them.

These Nazi advocates prefer to "forget" some statements made by Friedrich Jeckeln. For example, he said: "There are only masters and their slaves in the East, and Germans are the only masters."

Jeckeln admitted that he had ordered the formation of punitive police battalions, which later constituted the core of the Latvian SS-Legion. Historian Maxim Margolin writes: "Therefore, any attempt by modern Latvian historian and politicians to draw a dividing line between the SS-Legion and the punitive battalions and to convince the world that the Legion ‘fought for Latvia's freedom and independence' and therefore had nothing in common with the butchers and punitive units, is a disgusting lie. By logic, the annual March processions of Latvian SS-Legion veterans and their young followers in Riga should carry the portraits of SS Obergruppenführer Jeckeln, who witnessed the SS-Legion taking their oath on Dome Square in Riga in March 1943."

Jeckeln's response to a question about the role of the Lithuanian, Latvian and Estonian "self-governments" in the German punitive policy in the Baltics should be added to history books. Jeckeln said the following: "I often had to deal with the leaders of the Latvian ‘self-government' DANKERS and BANGERSKIS, Lithuanian leader KUBILIUNAS and head of the Estonian self-government Dr. MAE. I must say that they were devoted friends of Germany. They prioritized German interests and didn't think at all about the fate of their people. They were German puppets… They thought that even if Germany lost the war, it would be very good if before that Germans and they managed to kill as many Soviet patriots and especially Communists as possible. Without patriots and Communists, they would be able to sell their people more easily to some other world power."

It was only in the 1990s that the spiritual and political heirs of the wartime collaborationists managed to sell their people to another strong world power. Having secured the secession of Latvia, Lithuania and Estonia from the Soviet Union, they quickly destroyed Soviet-era industries and turned the Baltics into a US protectorate and a NATO bridgehead.

They have also written their own version of history, one that is packed with delusional lies about the alleged Soviet occupation, Ešafots (Scaffold) being a perfect illustration of this.