by Timofei Sergeitsev
A new Europe, which the United States is creating as a replacement for Old Europe , will be exactly what Ukraine is today in terms of social governance technology, says Zinoviev Club member Timofei Sergeitsev. 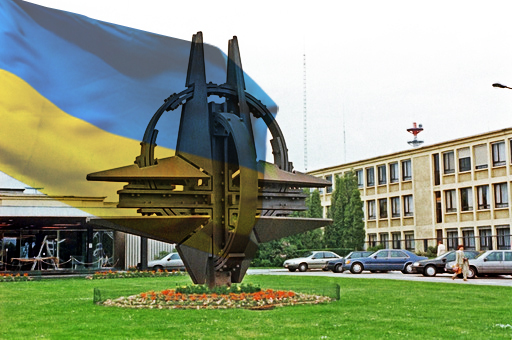 Ukrainians sincerely believe that "in Europe" or "with Europe" they will have a wealthier and more free and stable life, if not heaven on earth. Other options — real independence, self-reliance, let alone part of Russia's sphere of influence — are discarded as vastly inferior. Ukraine hopes to cover its path to Europe enjoying active US assistance and open guidance. Ukrainians, who blindly believe in a European-style renovation of their country and are afraid of missing the last train to Europe, are not aware that they are not the outsiders but rather the leaders of the genuine European process.

In fact, they are more European than the actual citizens of the advanced West European countries, which are yet to catch up with Ukraine on the path of true new Europeanization. The thing is that there is no real European project/process other than the managed and consistent loss of sovereignty and degradation of European states, which are being transformed into second- or third-rate look-alikes of the United States (for it to be able to govern and command them more easily).

The February 2014 coup and the subsequent civil war in Ukraine, Crimea's reunification with Russia, and Russia's move to protect Syrian statehood made the United States emerge from the shadow and lift the veil off its guiding role in Europe. At the same time, this turned the spotlight on the current state of European sovereignty, or, more precisely, non-sovereignty.

The latter is also an important afterthought concerning Russia's foreign policy of the past 30 years, starting from perestroika and the hopes of joining a "common European home." As we let Poland fall into the embrace of Solidarity and Lech Walesa (1990), let the GDR fall into the embrace of the FRG (1990) and both countries fall into the embrace of the United States, as we gave up our "50-percent stake" in the governance of post-war Europe, we hoped that the European countries we were releasing from our control had enough independence potential and would be able to contribute to Europe's political revival. In particular, Russia expected this hypothetical European body politic to honor the promise on NATO's non-expansion to the east as meeting the core interests of the hypothetical European neutrality.

Today it is clear that Russia's bet on Europe was not secured by historical reality. Having let its half of Europe go, Russia simply shifted power to the United States that was quick to take advantage of the opportunities this offered.

The European Union (1992) is not a federation or confederation of member countries that reflects their collective will. Rather, it is a supranational bureaucracy that fetters and subdues the states under its control. The European Commission, the executive arm of the EU, is not accountable to the member countries through the democratic procedures. The EU has no armed forces of its own and bears no political responsibility. It is an extension of the post-war superpower institutions that ruled Europe, the birthplace of the world wars, but now without Russian involvement. Of course, it would be strange if Russia sought to join this union with any role whatsoever.

The admission of East European countries to the EU in the 21st century finally tightened US control over Old Europe by stripping it of both the chance to tack between the two global centers of power and of what remained of its sovereignty, which it could have maintain by encouraging solidarity of the European core, or economically most developed European countries. Today these countries are openly urged to break with the historical traditions of their statehood and their entire culture in all their manifestations that really organize and influence social life. It's unclear, whether even a museum of the dead European culture has the right to exist. I think not, especially if European culture and history were to be presented at least partly truthfully and accurately.

It appears that the European societies should be larded with bearers of alien cultures, who feel offended by and in conflict with indigenous Europeans. They are a modern equivalent of black slaves, whom US society has not assimilated to this day. An identical virus is being used to weaken the European social organism. Successful attempts are being made to replace European political culture (the culture of sovereignty) with the standard ideology of various nationalisms. But the new German or French nationalism is basically no different from the equally artificial Ukrainian nationalism that is incapable of political self-determination.

The main point is that Europe, primarily the advanced West European countries, should be stripped of industrial capital, its main economic possession. This is the key precondition for even a hypothetical reindustrialization of the United States, without which it will never get out of the debt hole or shed its industrial dependence on China.

European commodities are exclusive goods on the US market, while Chinese goods are staples. A decline in the US living standards must be matched with a much more dramatic decline in the living standards and quality of life in advanced Old Europe, for no other comparisons would placate the essentially racist US population. The United States is involving Europe into a free trade and economic partnership area: the consequences for Europe will be the same as for Ukraine and Moldova, which Europe has involved into its own free trade and partnership zone.

The Ukrainians are the unconditional leaders of this new Europeanization, having replaced the former leaders, the Baltic nations, and before them, the Poles. The more primitive, artificial and formal the initial nationalism of this identity formula, and the more abstract and utopian the Europeanism of its second instalment, the more noncommittal, vague and manipulative will be the promised American goal.

A new Europe, which the United States is creating in place of old historical and cultural Europe, will be exactly like Ukraine in terms of social governance technology. Ukraine is not on the outside looking in, but is the model and experimental prototype of European degradation.

However we, Russians, "don't need this kind of hockey," as the great sports announcer Nikolai Ozerov said in 1979 about the Canadians' violent style of play. The phrase is now used in Russia to describe something that went wrong.

Russia is a historical European country with the largest territory and population, which has advanced further along in its historical future than the other European countries, a future where scientific achievements are used not only to create means of production, but also to exercise power.

Unlike the United States, Russia's social knowledge is public, not occult. We weren't able to get a foothold in that future, but we at least have accumulated the experience of living in it. At the same time, we still hold the primordial attitudes of Europeanism that haven't been distorted by the Christian faith. And lastly, we have a sovereign political culture.

It must be understood that the United States was created as an anti-European project, as a society of sectarians and dissenters, as an alternative to the European social class traditions. After returning to the Old World on the wave of its political success during WWII and assuming control over the ruined Europe, which was to blame for the war and its atrocities, the United States, whose involvement in the war was rather modest by European standards, failed to eliminate the European civilization solely because there was the Soviet Union/Russia.

Even though Russia retreated after the collapse of the Soviet Union as a political project for the advancement of Communism, leaving Eastern Europe open to US influences, the (culturally) socialist Russian Empire has remained the last and only truly European country.

It is logical that the destruction of the European civilization is proceeding under the banner of Europeanism, as this is part of the ideological technology of managed degradation. The nostalgic Marxists can even find in this some dialectic charm. But we must resist the provocations of Ukrainian European leadership, for the price for succumbing to this temptation will be a long, slow and very painful process of dying, which a voluntary renunciation of one's identity inevitably brings about.