Operation Barbarossa and the Myth of the Preventive War

by Oleg Nazarov
“The 75th anniversary of Operation Barbarossa is an event we have no right to ignore,” says Oleg Nazarov, member of Rossiya Segodnya’s Zinoviev Club. 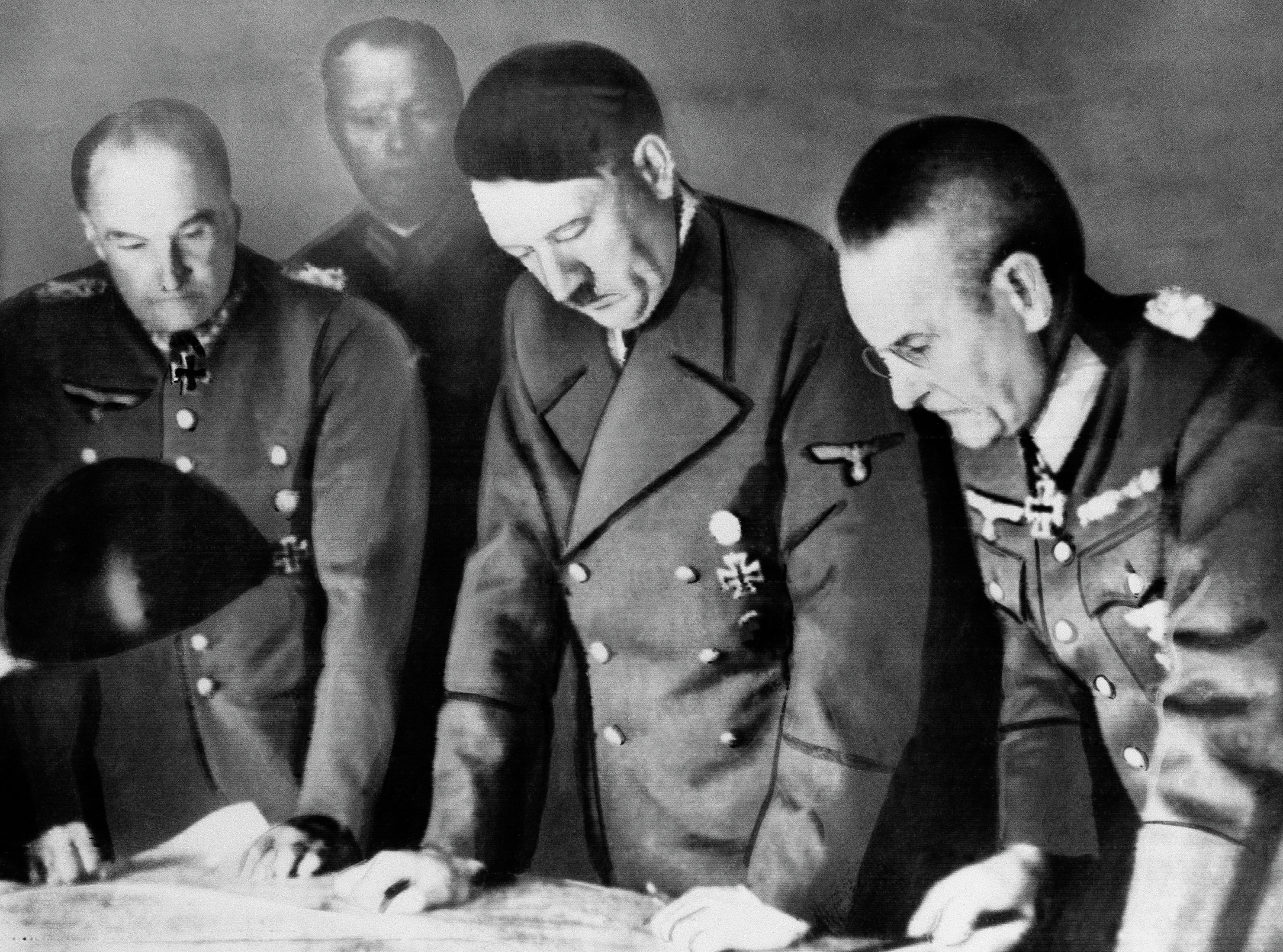 On December 18, 1940 Third Reich Fuhrer Adolf Hitler issued Directive (Operation Barbarossa). Germany and its allies launched these sinister plans six months later, in June 1941. This resulted in millions of human deaths and enormous destruction.
It is necessary to write about the blitzkrieg plan because the drafting and adoption of the plan in 1940 clearly shows the false and cynical nature of the myth about Germany's "preventive measures" against the USSR. For many years Viktor Rezun-Suvorov, a traitor to his country and a falsifier of history has been spreading this myth just as his successors have.
In 1978 Rezun, who worked in the Swiss GRU residence as an employee of the Soviet permanent mission to the UN, developed a same-sex relationship with a foreigner who worked for the Western secret services. When they began to blackmail Rezun (gay relationships were unacceptable in Soviet secret services), he "opted for freedom" and asked Britain for political asylum. Working under the guidance of British secret services, this traitor became a historian. Under the name of Viktor Suvorov. He began to issue books that distorted actual history and discredited the USSR. There are many of them in Russian bookstores. Our so-called Western partners have never withheld money for the dumbing-down (Alexander Zinoviev's term — O.N.) of our citizens. Rezun was particularly adamant in blaming the outbreak of World War II primarily on the Soviet Union and insisting that the German invasion of our territory was a "preventive war." Supposedly, Germany was compelled to attack the Red Army that was preparing to launch an offensive against it.

Who stood at the origins of the blitzkrieg plan

In reality Hitler had nurtured plans to attack the USSR since the 1920s. Long before June 22, 1941 he bluntly said: "We National Socialists consciously draw a line beneath the foreign-policy tendency of our pre-war period. We take up where we broke off 600 years ago. We stop the endless German movement to the south and west of Europe and turn our gaze to the lands in the east. At long last we break off the colonial and commercial policy of the prewar period and shift to the soil policy of the future.
If we speak of soil in Europe, we can primarily have in mind only Russia and her vassal border states."
Hitler ordered the creation of a comprehensive plan to rout the USSR just several days after France was defeated and surrendered on June 22, 1940. However, even before getting Hitler's instructions, the Chief of the OKH (Army Supreme High Command) General Staff, Franz Halder, began to study the issue of mounting a military strike against Russia on his own initiative.
At a July 21 meeting with the commanders of the German armed services Hitler defined the main goals of the war against the Soviet Union.
On July 31 he met with Halder; the Commander of the Ground Forces Field Marshal Walther von Brauchitsch; Chief of the OKW (Armed Forces High Command) Staff Field Marshal Wilhelm Keitel; and Chief of OKW Operations Staff Lt-Gen. Alfred Jodl. Hitler was eager to take the USSR as early as 1940 but had to postpone the plan. His generals persuaded him that it was necessary to thoroughly prepare for this war — build airfields, roads, depots and many other things. As a result, it was decided to attack the USSR in May 1941 and defeat it in five months at the most — before the end of autumn.
The Nazis were drafting the plan for the campaign from August to November. First Oberquartermaster of the OKH General Staff, Lt-Gen Friedrich Paulus; Chief of Staff of the 18th Army Maj-Gen Erich Marcks; and Lt-Col Bernhard von Lossberg made a tangible contribution to the plan for the war against the USSR.
In November 1940 Halder, reported on Operation Otto to von Brauchitsch. This was the initial code name for the plan to attack the USSR. After some changes, the plan was submitted to the Fuhrer. On December 18 Hitler signed Directive 21 (Operation Barbarossa) and on February 3, 1941 endorsed the ensuing directive on the strategic deployment of ground forces. The directive was sent to the staffs of three army groups, the air force and the navy.
In late February of the same year, Germany began to deploy its army groups "North," "Center" and "South" near Soviet borders. Rezun-Suvorov prefers not to recall this.

Alfred Rosenberg's Political Diary was published in Russian in 2015 and was another documented refutation of Rezun-Suvorov's fantasies and falsehoods. On April 2, 1941 the Nazi chief ideologist described a cheerful event: "'Rosenberg, your hour has struck!' This is how the Fuhrer ended a two hour-long conversation with me…"
The conversation was centered around Rosenberg's appointment as commissioner for the Central Control of Questions Connected with the East European Region. This camouflage was cast off after Germany's attack on the USSR. On July 17, 1941 Rosenberg was appointed Reich Minister for the Occupied Eastern Territories. He had been preparing for this mission since April.
There is another indicative entry in Rosenberg's diary. On May 1, 1941 he wrote: "I've just written five leaflets: to the Red Army, the people of Russia, Ukraine, the Caucasus and the Baltics with all the relevant nuances that are required by historical conditions and political targets." So, the preparations for a "preventive war" were fairly meticulous, "with all the relevant nuances."
On June 20, 1941 when the Nazis were about to strike the USSR, Rosenberg explained to the high command the political goals of the campaign and the plans to dismember the USSR. He said, in part: "Today we are not going to launch a crusade against Bolshevism just to free ‘these poor Russians' from this Bolshevism forever, but to pursue global German policy and ensure the security of the German Reich… Therefore, the war aimed at creating an indivisible Russia is ruled out. Stalin's replacement with a new tsar and even the appointment of a nationalist leader will mobilize all energy on that territory against us. This concept of a united Russia that has been common until now will be replaced with a completely different view on eastern issues…"
Nazi Germany planned to dismember the USSR, take its resources, destroy part of its population and mercilessly exploit the rest.
Rosenberg did not conceal this. He noted: "There is no doubt that the subsistence of the German population is the main German requirement in the east. The southern regions and the North Caucasus will find reserves for the subsistence of the German people but we don't consider it our duty to… also feed the Russian people. We know that this is a tough necessity that compels us to forget all emotions. Most certainly, there will be large-scale exploitation. The Russian people will have to go through difficult years."
The Nazi ideologue and German generals assumed that only the Russian people would have to go through difficult years…
The attempt to carry out Operation Barbarossa did not lead to another triumph for German weapons makers contrary to their expectations. On the fourth day of the war, Erich Marcks, who was considered the main expert on Russia in Germany, was heavily wounded as a result of shelling and lost his leg. In July 1941 Wilhelm Keitel was informed about the death of his son, a tank man. German losses were growing each day while the chances of winning the war — not by late autumn but anytime — were decreasing. Operation Barbarossa was a fatal mistake by Hitler and his generals.