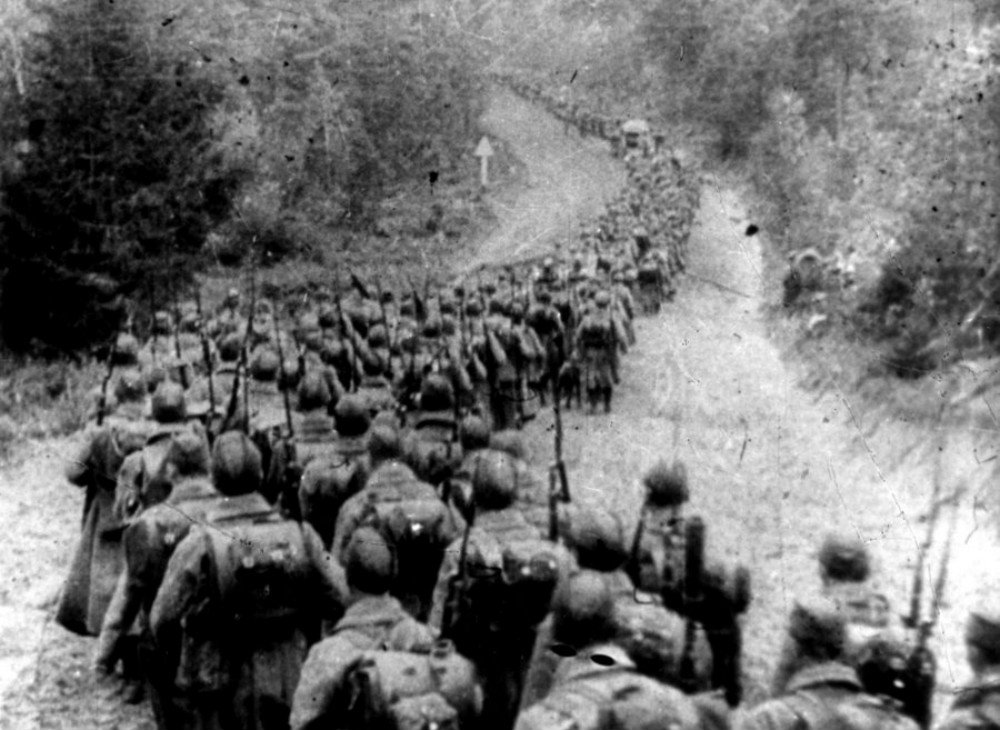 Five years ago, on September 23, 2009, the Polish Sejm adopted a resolution describing the Red Army Liberation Campaign of 1939 as aggression against Poland, and officially blaming the Soviet Union for unleashing, together with Nazi Germany, World War II. The initiators of the idea ignored the fact that by September 17, the Second Rzeczpospolita had been routed by Germany and ceased its inglorious existence, while our country had for the most part only recovered the tracts of land that had belonged to it before World War I. It does not take a prophet to predict that in connection with the 75th anniversary of the liberation of western Ukraine and western Belarus from Polish occupation, official Warsaw will once again have a fit of anti-Soviet and anti-Russian hysteria.

Meanwhile, the people who ran Poland in between the two world wars were in fact Adolf Hitler's accomplices in unleashing World War II. This article is an investigation of their acts.

The battle for Poland "from sea to sea"

No sooner was Jozef Pilsudski proclaimed Poland's Chief of State in November 1918 than the newly established government of the Second Rzeczpospolita announced Sejm elections "wherever there are Poles." At that time the issue of the borders of Poland, which had for more than a century been absent from the world's political map, remained open. Taking advantage of the chaos in Europe, which had just stopped fighting, the Poles started expanding the borders of their re-established state in all directions.

That not-entirely-unselfish drive led to foreign policy conflicts and armed clashes with neighboring states: with the Ukrainian People's Republic over Lviv, East Galicia, the Holms Region and Western Volyn; with Lithuania over Vilnius and the Vilensk Region; and with Czechoslovakia over the Cieszyn Region. Britain and France resolved the Polish-Czechoslovak military-political conflict of 1919-1920 over Cieszyn Silesia not in Warsaw's favor, but that did not cool the Polish hotheads in their battle "from sea to sea" (from the Baltic Sea to the Black Sea). In the north and the west, they were in conflict with Germany, and in the east they were at war with Russia.

On December 30, 1918, Warsaw told Moscow that the Red Army offensive in Lithuania and Belarus was an act of aggression against Poland, making it "incumbent on the government to respond in the most energetic manner" and defend the territories populated by the "Polish people." Warsaw was unfazed by the relatively small proportion of Poles in the [country's] population, nor did it care what other ethnic groups thought.

The Poles began the defense of those territories by executing a Russian Red Cross mission on January 2, 1919. On February 16, Polish and Red Army units first clashed in a battle for the Belarusian town of Bereza Kartuzskaya. That was when the first 80 Red Army soldiers were taken prisoner. In all, by 1922, over 200,000 people from the former Russian Empire — Russians, Ukrainians, Belarusians, Tatars, Bashkirs and Jews — had been held in Polish captivity. Over 80,000 of them died in Polish death camps, which appeared long before Hitler came to power in Germany.

The tragedy of Poland's POWs requires a separate study, so I will only note that the "civilized" European country prefers to forget about both those 80,000 people who perished in the Polish camps and about the 600,000 Soviet soldiers who were killed as they fought to free Poland from Nazi occupation in 1944-1945. The Poles are too busy pulling down monuments to Soviet soldiers who saved their grandfathers and grandmothers from Nazi genocide. So Russia had no reason to bemoan the group of Polish Russophobes who crashed near Smolensk due to their own stupidity.

In 1920, the Soviet-Polish War broke out. It ended with the Riga Peace Treaty of 1921 whereby western Ukraine and western Belarus ended up under occupation. The policy that the Polish "civilizationists" pursued "on the outskirts" also requires a separate study. I will just note that long before the Nazis went ahead with the practical implementation of their "racial theory" postulates, the Ukrainians and Belarusians in Poland were already "second rate" people.

Less than a year after the Nazis came to power in Germany, on January 26, 1934, the Declaration on Pacific Settlement of Disputes and the Non-Use of Force between Poland and Germany (German-Polish Non-Aggression Pact?) was signed in Berlin. In signing that agreement, Berlin evaded the need to provide guarantees of the inviolability of the Polish-German border, established after the end of WWI. "The sides declared peace and friendship, and ended the customs war and mutual criticism in the press. Warsaw perceived that document as a foundation of the country's security and a means of intensifying Poland's great power ambitions. Germany succeeded in passing the border issue over in silence, while the Soviet attempts to explain to Poland that it had been duped naturally failed," historian Mikhail Meltyukhov writes.

For his part, Polish historian Marek Kornat maintains that Pilsudski and Polish Foreign Minister Jozef Beck "regarded the agreement with Germany as the greatest achievement of Polish diplomacy." It is noteworthy that after Germany quit the League of Nations, its interests in that organization were represented by Poland.

In seeking rapprochement with Berlin, the Poles counted on Germany's help in the conflict with Czechoslovakia over Cieszyn Silesia. Historian Stanislav Morozov pointed out that "two weeks before the Polish-German non-aggression pact was signed, an anti-Czech campaign began, initiated by the Polish Foreign Ministry. It showed up in numerous Polish press publications, accusing the Czech authorities of oppressing the Polish ethnic minority in Cieszyn Silesia. In Czechoslovakia, this line was pursued by Leon Malhomme, the consul in Moravian Ostrava."

After Pilsudski's death in May 1935, power ended up in the hands of his followers. Foreign Minister Jozef Beck and Marshal Edward Rydz Smigly, the future commander-in-chief of the Polish Army, became the key figures in the Polish government.

After that, the pro-German tilt in Warsaw's policy only intensified. In February 1937, Nazi No. 2, Hermann Goering, arrived in Poland. During a meeting with Edward Rydz Smigly, he said that the threat to Poland and Germany was posed not only by Bolshevism but also by Russia itself, regardless of its system: monarchy, liberalism or whatever. Half a year later, on August 31, 1937, the Polish General Staff reiterated that point in its Directive No. 2304/2/37, stressing that the ultimate goal of Polish policy is the "destruction of Russia in any form."

So, the goal was formulated two years before the outbreak of World War II, which the Poles try to blame mainly on the USSR. They were also outraged by the remarks made by Soviet People's Commissar for Foreign Affairs Vyacheslav Molotov, who in 1940 described Poland as "an ugly creation of the Versailles Treaty." Here, too, we see double standards. After all, Molotov was only rephrasing Pilsudski who described the Czechoslovak Republic as "an artificial and ugly creation." So the Poles had better keep quiet and eat their apples.

Starting in 1938, Berlin and Warsaw, through coordinated actions, started preparing to dismember Czechoslovakia. The Berlin-controlled Sudeten German Party began to raise its profile in the Sudetenland, while Poland created the Union of Poles in Cieszyn. The cynicism and duplicity of the Pilsudski followers is evident from the fact that while engaging in subversive activity in the neighboring state they urged Prague to stop "working against" Poland!

The Soviet Union was willing to help Czechoslovakia, but in the absence of a shared border, Russian army units could only enter Czechoslovakia with permission from Poland or Romania. Understanding that the fate of Czechoslovakia was largely in their hands, on August 11 Pilsudski followers told Berlin that they would not allow Red Army units to cross their territory and would advise Romania to do the same. Additionally, on September 8-11, the Poles conducted large-scale maneuvers near the country's eastern border, in a show of their readiness to rebuff a Soviet invasion, which was as real as Russia's invasion of Ukraine, which the lying Western propaganda has been shouting about for the last half a year.

In September 1938, when preparations for the so-called Munich Conference were in full swing, Beck did all he could to ensure that the Polish representative in Munich sat at the same table with the British, French, German and Italian leaders. However, neither Hitler nor Prime Minister Neville Chamberlain saw any point in inviting Poles to Munich. As Morozov aptly observed, "the Western powers' attitude toward the Poles had not changed: they refused to see Beck as a representative of a great power."

Thus, contrary to their wishes, the Poles were not among the participants in the Munich Deal, one of the most despicable events of the 20th century.

Hurt and angry, Beck stepped up the pressure on Prague. As a result, the demoralized Czechoslovak leaders surrendered, agreeing to cede the Cieszyn Region to Poland. Historian Valentina Maryina wrote that "on October 2, Polish troops began to occupy the Czechoslovak territories that they had demanded, which were of enormous economic importance for Poland: by expanding its territory by just 0.2 percent, it increased the capacity of its heavy industry by almost 50 percent. After that, Warsaw demanded, like an ultimatum, new territorial concessions from the Prague government, now in Slovakia, and it had its way. Under the December 1, 1938 intergovernmental agreement, Poland received a small piece of territory (226 sq km) in northern Slovakia (Javorina Orava)."

For those "feats" Winston Churchill called Poland "the greedy hyena of Europe."

The Third Reich's allies that never were

Literally from the very first days of the Second Rzeczpospolita, its leaders dreamed about a Great Poland "from sea to sea." The Pilsudski followers perceived the seizure of the Cieszyn Region as the first step along that path. However, they harbored more ambitious plans. The December 1938 report from the Second (Intelligence) Directorate of the Polish Army Supreme Command reads: "The dismemberment of Russia underlies Poland's eastern policy… The goal is to make thorough preparations both physically and spiritually. The main objective is to weaken and rout Russia."

Aware of Hitler's plan to attack the Soviet Union, Warsaw counted on joining the aggressor. On January 26, 1939, during a meeting with German Foreign Minister Joachim von Ribbentrop, Beck "modestly" observed that "Poland is claiming Soviet Ukraine and an outlet to the Black Sea."

At that point it turned out again that Hitler did not regard Poland as a great power. He assigned to the Poles the role of satellites, not allies. The Fuhrer started pressing Warsaw to agree to have the Free City of Danzig included into the Third Reich and to allow the building of "a corridor within a corridor": i.e., an exterritorial railway line and a highway across Polish lands between Germany and East Prussia.

Poland, which regarded itself as a great power, refused. In early April 1939, Germany started making preparations to invade Poland. Following the dismemberment of Czechoslovakia, Poland's military-strategic situation deteriorated. After all, in addition to the Cieszyn Region, Poland received German troops, which were now on the former Polish-Czechoslovak border.

It is common knowledge that Poland's position became the main reason for the failure of negotiations between the Soviet, British and French military missions, which took place in August 1939 in Moscow. Warsaw categorically refused to let the Red Army into Polish territory, without which the Soviet Union was unable to help the Poles fight off a German attack. The reason for the refusal was disclosed by former Polish ambassador to France Juliusz Łukasiewicz in a conversation with French Foreign Minister Georges Bonnet. He said that Beck "will never allow Russian troops to occupy the territories that we seized from them in 1921."

Thus the Polish ambassador was effectively recognizing that the Poles had occupied western Ukraine and western Belarus in 1920.

To sum up, the Second Rzeczpospolita played a major role in unleashing the second "world massacre." The fact that Poland itself was attacked by Germany and lost six million people cannot alter this conclusion.
Oleg Nazarov (Dr. Sc., History), member of the Rossiya Segodnya Zinoviev Club