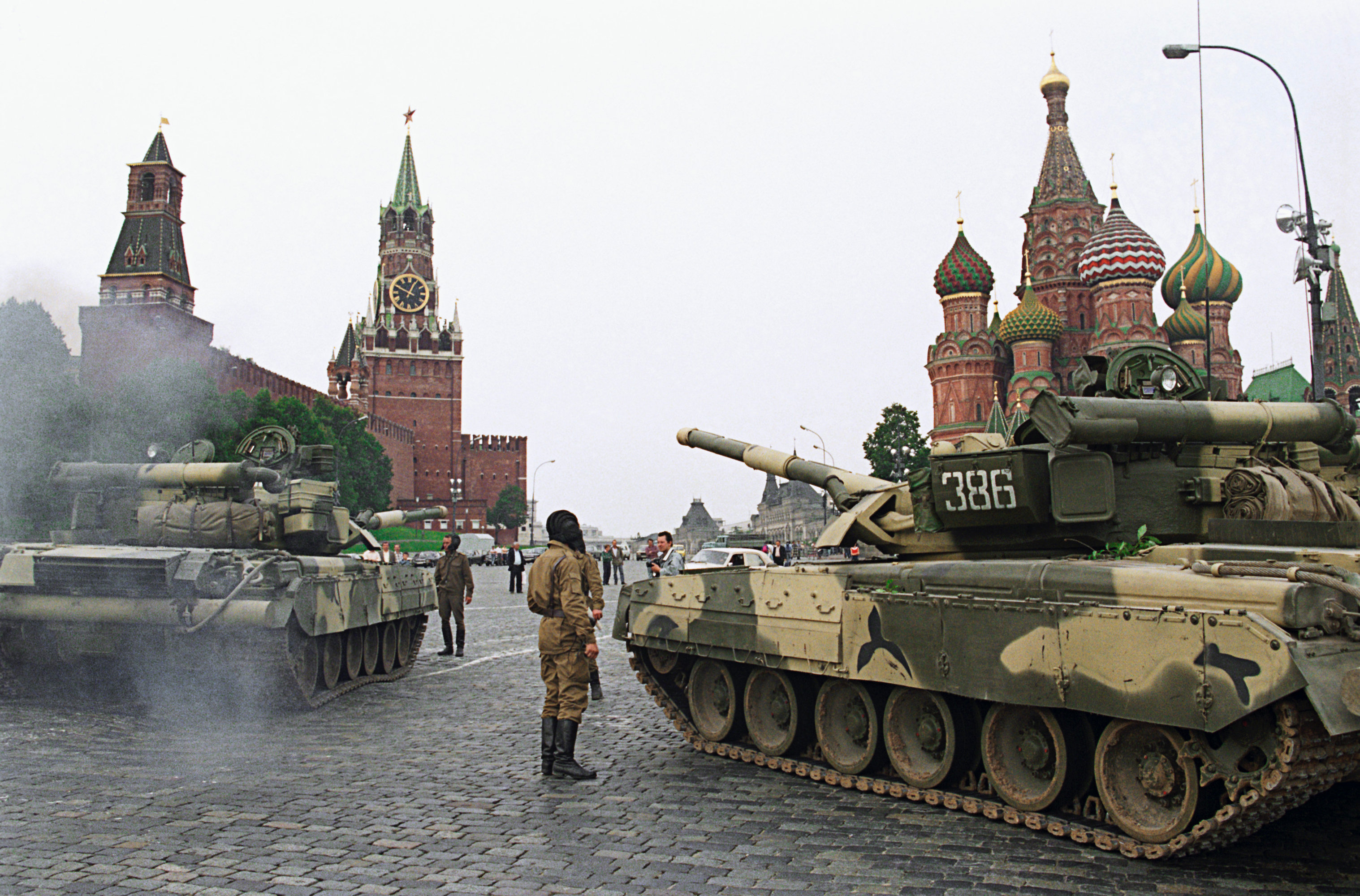 "They targeted communism but hit Russia."

"‘There will be three of us, including one wounded

plus a young guy, almost a child, but they

will tell everyone there were four of us.'

‘This is impossible,' Atos replied."

The Three Musketeers by Alexandre Dumas

Another August. According to Francis Fukuyama, the American philosopher and ideologue, in August 1991 human history came to an end, having reached the final form of government — the global dominance of liberal democracy. He wrote this in 1992. We discussed the true nature of modern democracy in the last column (link). Now let's turn to more important things, like power, since democracy is merely a form of organizing power and, at the same time, one of the methods of its implementation. If global universal controlled democracy is a form of exercising power, what does global power mean today?

What really happened in August 1991?

In August 1991 we adopted a new secular religion (accompanied by the customary human sacrifices) — faith in democracy. We did this without realizing it, having renounced our secular faith in communism. All "civilized" humanity was persuading us to renounce communism and live happily in the new "common home of humanity" which Mikhail Gorbachev liked to talk about so much. In reality, our defeat in the ideological Cold War was accompanied by the global transformation of the international order and global power. But the home that emerged was a far cry from what one of the most ungifted Soviet leaders was chattering about. The home was run by a fully-fledged master and its inhabitants developed a sense of obedience. All the institutions of the so-called bipolar world that were designed for settling disputes between the two global power centers almost instantly (in historical terms) turned into instruments of global hegemony for one power center — the United States. All institutions of the international order, including the United Nations, were used as vehicles for achieving global hegemony or were simply ignored if they were unfit for this purpose. A hegemon is a hegemon because it is free to choose its means. This was carefully concealed until the start of the 2000s when the truth finally surfaced. When Vladimir Putin described the breakup of the USSR as "the greatest geopolitical catastrophe of the 20th century" he was referring not only to the millions of people who had lost their homeland overnight but primarily to the collapse of the global political system of maintaining peace and avoiding war — a system for which humanity paid such a high price during the two world wars.

The Russian concept of sovereign democracy was a first attempt (and an inadequate one, as is clear today) to ponder on the situation and make a "timid" response. By now we have been told in no uncertain terms that sovereign democracy does not exist. Democracy is merely a religious arrangement of the new international order, with one sovereign for the entire world and destruction for anyone who would prevent him from exercising global sovereignty. Carthage must be destroyed. Nothing new here. This was the gist of the end of history in the European interpretation, but Fukuyama neglected to mention it. European history came to an end because one country had achieved global hegemony. Strictly speaking, it was thought in 1992 that nothing could prevent the emergence of hegemony after the disintegration of the USSR.

Global domination as a foundational idea of European civilization

The ultimate goal of history in the European interpretation is power over the world. Nothing else has really interested Europeans since the times of Aristotle or Alexander the Great. To project power to the limits of the ecumene — this is the true historical goal with which Aristotle equipped Alexander the Great and the rest of European civilization. The Empire of Alexander the Great, the Roman Empire, medieval Catholic empires, Napoleon, the British Empire, Hitler and now the United States. For the sake of fairness, it should be noted that the goal of Russian communism was briefly world domination. We imported the idea of building a global communist world (that we were supposed to rule as the leaders of communist development) as well as communist ideology from Western Europe. Stalin had de facto given up on this goal by the late 1930s. The de jure renunciation of the idea of global communist supremacy was initially enshrined in the postwar international order and later reaffirmed by the Helsinki Final Act's overarching thesis of "peaceful co-existence of the two systems."

Russia has thwarted two global domination projects in its history. We stopped Napoleon and Hitler despite the fact that both had already conquered Europe. Both Napoleon and Hitler had high hopes that the Russians would topple their own objectionable governments. In the case of Napoleon, this mission was supposed to be carried out by peasant serfs and the French-speaking and Europe-loving nobility whom he claimed to be granting a constitution and freedom. In the case of Hitler, this mission was supposed to be fulfilled by everyone who had suffered under the Soviet government — from the White Guard émigrés to the collectivized peasantry and Gulag prisoners.

These hopes did not materialize. The current US world domination project stretches beyond Europe to encompass practically the entire world. Since Russia is not fully on board, it must be destroyed like Carthage. This is the current Western consensus. The Americans hope that in this war against Russia, the Russians themselves will overthrow Putin's odious regime. They also hope, like Napoleon and Hitler before them, that Russia will cease to exist. Let it disintegrate into several countries under external control that will dutifully supply the "civilized" world with resources. In their free time the Russian survivors can play balalaika, drink vodka and breed bears in this ethnic reserve. Tatars can ride their horses freely and Yakuts can go hunting.

We've already been duped once. In August 1991 we were eager to join the common world of liberal democracy, and the alternative presented by the State Emergency Committee was absolutely uncompetitive. Nobody came out to defend the committee because nobody believed these weak, useless people represented the future of the country. At that time we were told to abandon communism and now we are being told to abandon Putin. Just overthrow him and you'll be happy. Putin is very different from Gorbachev. But is Putin and his political and governing team different from the committee? We will soon have to find out. The popular claims that Russia is isolated in the international community is nonsense. There has been no international community for the past 23 years. There is the American world and some countries that do not accept it. Of course, we could give up. Many say that if we had surrendered to Hitler we would be drinking beer by now. If you don't like Hitler, then we could have surrendered earlier to Napoleon, and we'd be eating croissants like they do in Paris.

We remain uncivilized barbarians to the Western world, but culture has nothing to do with it. Our culture is largely European. We have adopted almost all of European culture — including the philosophy but excluding Catholicism — of our own free will. The sooner we stop looking for some artificial Eurasian cultural identity the better for us. Such a cultural phenomenon does not exist. It is a hollow concept. It is very important not to deceive ourselves.

The main thing is not to confuse culture with civilization. Our culture is predominately European, while our civilization is thoroughly Russian. There is no contradiction here because culture is a global substance of norms and specimens whereas civilization is a local way of implementing cultural standards in a certain hierarchical or heterarchical order. Few civilizations are able to enrich culture in the process, but Soviet civilization was one. Civilization is a fairly specific mode of the life of society. Even the ancient Greeks understood this. Civilization means power rather than culture. We'll become civilized to the West only if we fully submit to its power. Needless to say, as a conquered people, we will always remain third-rate. In the past we were never conquered and hence we became civilized. We always borrowed from world culture what we needed and experimented at home with these borrowings with varying degrees of success. But this is exactly why we were part of History and helped make it. Herein lies the historical reason for the existence of large human communities. A nation that is unable to subject itself to cultural and civilization experiments — not to mention one that cannot even uphold this right — is bound to disappear as a cultural and historical entity. This is where the real end to history lies. Every nation has its own. Fukuyama was wrong.